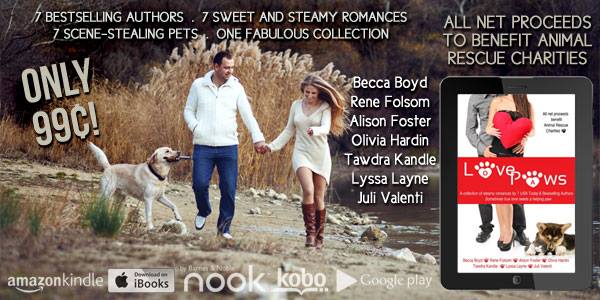 Help us celebrate Prevention of Cruelty to Animals Month and go download this amazing anthology NOW. Only 99 cents for seven wonderful, sexy romances . . . you can’t beat that deal.

Of course, what could make six contemporary romance shorts plus one story with a paranormal twist by award-winning and best-selling authors even better? Add seven sweet, scene-stealing pets . . . and then make the whole project a benefit for animal rescue charities!

That’s just what we’ve done. LOVE PAWS features short stories with a little bit of steam, a little of sweet and happy endings all around. Each story also includes a pet, just to give the romance a bit of a boost.

Each author is donating her portion of the net proceeds to a specific animal charity. Check out which charities will benefit below! And don’t forget to enter the giveaway-scroll down.

Get your copy now! Amazon/iBooks/Nook/Google/Kobo

Montana Heat (Chefs of the West, Book One) by Becca Boyd (Heart of the Valley Animal Shelter)

One protective smokejumper, one reluctant landowner, one big fire… Randa Sadler has turned away the sheriff, the Forest service, and all her neighbors. She knows the fire is coming, and she’s not leaving her home. When Tyson Herrick is sent to talk her down off the mountain, he finds the secret that’s keeping her there… but can he save her from the oncoming fire without losing his heart in the process?

While burying herself into her editing job, Samantha Cline struggles to come to terms with the fact that her love life is dormant… and has been for quite some time. Every sickly sweet love story she has to edit continuously reminds her of how impractical romance is. Aside from her loyal group of friends who have their own relationship drama, she settles for companionship of the canine variety with her best bud, Chance. In truth, there’s only one man who has ever turned Sam’s head, though she’d never admit it aloud. She remembers watching him train horses on her dad’s farm as a teenager, and no other man has ever measured up. Now that he’s been living next door to her for a few years, she can’t help but wish he’d glance her way and show some sort of recognition. Sam is finally pushed over the edge when her dog runs off, forcing her to reassess her lot in life and what it would take to heal her heart in his absence. Then, one stormy night, her very sexy neighbor shows up on her doorstep, stealing her breath away with his presence. After a rather awkward encounter, Sam can’t help but wonder if she’ll lose her chance for good.

Saving Grace: A Beautiful Ruin Story Alison Foster (LA Animal Services)
They call it a moment of truth. We all have them. Nathan and I are no different. Those are the moments when things can go two ways, toward a better life or toward destruction.
Nathan was my everything — until this morning when a white lie entered our circle of trust which led quickly to a second lie and then, of course, in our life, a gun is always soon to follow.
They don’t cover guns or deceit in any of my baby books. I checked. My charmed life with my man and my sweet dog, Annie, is spinning out of control again. And to make matters worse, we haven’t had sex in weeks.
All in the Takeoff (The Rawley Family Romances – 4) Olivia Hardin (Pets Fur People – Tyler Humane Society No-Kill Shelter)
Harrison Richards may be part-Rawley, but he’s content with a ranch life just outside his tight family circle. On a flight to pick up a rescue dog after his cousin Kay’s wedding, his small Cessna is grounded due to weather. Harrison’s left to find lodging for himself . . . and a shepherd-mix named Curtiss. Single-mom Kitty Sears has a hectic life running a busy bed-and-breakfast. The short window between winter and summer is her unofficial vacation, when local tourism is almost dead, so she’s surprised to get a call about a guest looking for special accommodations. From the moment Harrison lays eyes on Kitty Sears, he has a feeling he’s getting more than he bargained for in a hostess. He’s not looking for romance, but it may be that love just needs a little spark to takeoff . . .
My One And Always (A THE ONE Trilogy and ALWAYS LOVE Trilogy Crossover Short) Tawdra Kandle (MuttNation)
Sydney moved to the small town of Burton, Georgia to run her aunt’s bakery. At least, that’s her excuse. She doesn’t exactly want to broadcast the fact that her own restaurant went belly-up, her boyfriend ditched her and her life is in shambles. And the cute newspaper guy who keeps pestering her for date with his danish? Yeah, that’s not happening. Will is pretty sure he’s a glutton for punishment. After all, Sydney’s made it clear she’s not interested, but he just can’t seem to stay away, no matter how hard he tries. Now, though, he’s got a secret weapon–the four-legged kind. Can this down-on-his-luck dog be the key to toppling the walls around her heart?
Dig Deep Lyssa Layne (Humane Society of Southeast Missouri)
Lindy James is the sister of baseball star, Tate James. When Tate’s neighbor Kip Deevers crosses paths with Tate’s little sister, he gets more than he bargains for-a grade school crush and a pair of dog paws on his chest. The attraction between the two is undeniable, but Lindy’s past has her afraid to let Kip get too close. Kip is willing to put aside his dislike for all things furry to get to know Lindy better, but will she let her guard down long enough for Kip to win over her heart?
Taunt: A Twisted Wolf Tale Juli Valenti (Suncoast Animal League)
There’s no place like home.
When a tornado plagues the state of Arkansas, picking up Emmy’s house and dropping it into a world she’s never seen before, she thinks things couldn’t get any worse. Except, she was wrong. Especially when it killed the good witch and she’s named a murderer.
In order to get home, and to escape the wrath of the enraged town-folk, Emmy must maneuver the Wicked Woods, along with her pet wolf, Laurent, to prove she, herself, is not a Wicked Witch. In the woods lurk nightmares of her own creation, and, when doubt begins to set in, she realizes things are not always as they seem.
Follow the story of Emmy and Laurent in this modern-day twist on The Wizard of Oz.