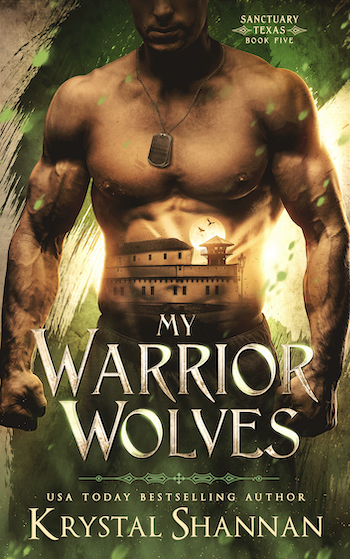 Passion, heat, and desire…
Only they can ignite her animalistic fire.

Still grieving and trying to pick up the pieces of her shattered life, Charlotte “Charlie” Mason attempts to rebuild after a tragic loss. But when she’s betrayed by her uncle and finds herself in harm’s way, the courageous she-wolf must enlist the help of the two men she sent away–the same two men who left with what remained of her broken heart.

Trying to resist the temptation to go back, Travis and Garrett McLennan can barely control the desire building within them–a desire only Charlie alone can satisfy. When the wolf brothers receive her cry for help, they know that the time has finally come and their shared mate needs them now more than ever. But with danger knocking on the threshold, can they get to her in time, saving her while holding on to what they both want?

A huff escaped from between my lips as I slid onto an empty barstool at Riley’s. The ache in my chest had turned from an annoying throb to the pounding of a fatal wound. If not for the Lycan moral code, I’d already be hauling ass up to Ada to bring Charlie down to Sanctuary, kicking and screaming if necessary. Her feelings on the matter could be discussed later. She should be with us. Somehow, we had to make her see that. Being away from her slowly ate away pieces of my soul. The scent of her heat clung to my brother and I. No amount of cold showers would relieve the need that hardened my dick every time I thought about her, either.

I couldn’t believe she’d sent Travis and I both away. We’d risked our lives. Saved her from Xerxes’ clutches in Savannah. Yet she’d sent us packing with no regard to the developing magickal bond torturing all three of us. There was no way she wasn’t hurting either. Once a mate bond started growing, only death would snap the connection.

My brother, Travis, sat next to me and waved to the tall redhead at the far end of the bar. Riley Moore acted as pack liaison between Rose, the town of Sanctuary’s leader and founder, and the rest of the Lycans in town. It helped keep the peace, and most of us tried to avoid Rose anyway… except when the cafe served really good food. Which tended to be more often than not.

“What’s happening, boys?” Riley asked, setting a pair of freshly filled beer steins in front of us. “You look like you swallowed a rattlesnake and it’s trying to come back up, Garrett. What’s eating you?”

“Nothing.” I hoped she would accept the answer and just leave, but Riley didn’t budge. In fact, she plopped her elbows on the bar and leaned forward, balancing her chin on her laced-together fingers.

“That’s a bunch of bullshit.” Her gaze flitted toward my brother. “You don’t look much better, hon,” she said to Travis. “I hear you left someone both of you want up in Ada.”

“People talk,” she said, winking. “This is a bar. Nothing stays secret for long when it stumbles in here.”

I growled and took a long swig of the dark amber liquid in front of me. The rich brew hit just the right spot, and I closed my eyes for a second.

“Pretty good, right?” Riley asked. “One of the pixies over at the market grew me some extra special barley. This new recipe has been the favorite all week.”

“It’s really good,” Travis answered before I could speak.

I nodded, agreeing with my older brother.

“I saw Eira’s tattoo the other day. Gorgeous work as usual. Who wants to take credit?”

I raised my mug and nodded. “That woman is something else. Despite how vampires normally react to silver, she barely flinched once from the silver needle.”

“Probably has something to do with the fact that she’s over a thousand years old and a Viking shield maiden.” Riley tipped her head to the side. “She seems like a nice addition to the town, along with Killían. She’s–what?–protector number six?”

“Y’all staying for the news brief at five? It’s supposed to be from the SECR today. Not sure what those bastards have to share, but I’ve got to watch it anyway. Just in case there’s something to report to Rose. The Sentinel never sleeps, you know.”

“Nothing on the radio tonight?” Travis asked her, setting his half-empty beer stein on the countertop.

She shook her head. “Nope. Nothing scheduled.”

I rotated the barstool until I could see the large screen TV she had on the wall just to our right.

She produced a remote control from beneath the bar and pressed a few buttons. The screen blared to life. News reporters stood in front of the federal building in downtown Savannah where Charlie said they’d been held in cages in the basement. The footage was old, at least several days. Politicians and the military fed exactly the information they wanted the people to see, but every once in a while, it did offer up something useful.

I half expected to see Xerxes on screen, but he wasn’t that confident…or he just didn’t have enough control of the SECR Republic yet to risk being exposed for the murdering bastard that he was.

Instead, a man with a teen girl standing just behind him flashed across the screen for a moment. The male spouted some garbage about how the SECR no longer had to live in fear of Others. That they had purged their homeland and the creatures were gone.

The political bullshit didn’t interest me, but the Asian-looking teenager standing behind the Mayor of Savannah did. Not unusual in and of herself, she looked eerily like the Kitsune woman who’d come back from Savannah with the rescue party only a short week ago. And she looked drugged –her body supported completely by a large bodyguard.

“Do you see what I do?” I whispered under my breath.

“Yep. Calling Mikjáll,” Travis answered, pulling his cell phone from his pocket. “Take a pic when they show her face again.”

I nodded and jumped up from the seat. Walking forward, I raised my cell and snapped a couple shots.

“They are on their way over.”

“Who is it?” Riley asked. “You know that footage was taken several days ago, right?”

Nodding my head, I climbed back onto the barstool. “Yeah, I know. Not sure who she is exactly, but she looks too much like Riza to be a coincidence.”

“The Kitsune female living with Mikjáll?”

“Yep. That would be her. That dragon barely leaves her and the baby’s side.” I turned back to the TV for a moment, but the Mayor was gone, and now some General prattled on about how new security measures were being implemented over the course of the next few weeks. Mostly just a bunch of bullshit that reminded people who lived in the SECR that it was illegal to own a firearm unless they were part of the Republic’s military force.

Riza, barely five feet tall, came into the bar, followed closely by the seven-foot hulking Drakonae male. One wrong move on the dragon’s part could send the fox shifter flying into the wall. For a man as big as Mikjáll, he managed to move with an unnatural fluidity.

He and Riza made an atypical match to say the least.

Riza should’ve been terrified of the angry dragon who’d come to Sanctuary having just lost his wife and his home. Instead, she’d latched onto him, and to everyone’s surprise, he connected with her. They were inseparable. Both sympathetic to the other’s losses.

I’d been worried about having Mikjáll on the mission to Savannah, but he’d proved he could keep his cool… for the most part. He had transformed into a fire-breathing dragon in the middle of a Savannah street, risking his species to exposure, but every single one of us knew we were alive because of that choice.

“Where is she?” Riza barreled straight toward the TV screen, but not seeing what she expected, she turned to my brother and me. “Mikjáll said you saw a girl who looked like me.”

I pulled my phone from my pocket and swiped the screen until the picture I’d taken showed. She plucked the device from my hand and covered her mouth as a semi-hysterical sob escaped her lips.

“She’s alive! I thought they killed her. We were captured together, but separated nearly a year ago. They told me she died.”

“Who?” Mikjáll asked, stepping up to look at the picture. “Is she family?”

By this time, the entire bar had fallen into a hush. Even the Lycans in the back room playing pool had stilled.

“It’s my sister. We were there together in Savannah. Djinn kidnapped us from our home. One day she became very ill, and they took her out of the facility where they were keeping me. The morning after they took her, one of the nurses told me Sochi died.”

The tears streaming down the young woman’s face made me wish I could disappear. “I shut down for months. I’m not even sure how long. They had to force feed me. They gave me shots, tried to artificially inseminate me at least four times before it finally took. Once I realized I was pregnant, I started eating again. I couldn’t hurt her. But then as the pregnancy continued, I realized they meant to take the baby away from me.”

“The next day, I used the powers I’d told them I didn’t possess and slipped away while they were cleaning my room.”

“How did you slip a guard?”

Riza’s skin shimmered, and she literally disappeared from view. I could smell her presence. She hadn’t left the room, but I couldn’t see her. A second later, something glimmered a few feet away and she reappeared.

“Impressive,” I said. “Wouldn’t mind having that ability myself.”

She nodded. “I wandered that facility for days after that, at term and miserable, scrimping and stealing food to stay alive. I birthed Suki in a closet and was nearly caught the next morning when I slept too long.”

“Fuck!” Travis snarled, only to receive an angry glare from the hovering Drakonae.

“Several days later, I stumbled on the group of Lycans making their escape. I followed them out of the building and then met your rescue party. If Mikjáll hadn’t grabbed me and Suki off the street that night, I don’t know where we would be.” She leaned into Mikjáll’s large form, and the Drakonae wrapped an arm possessively around her shoulders. “We have to get her out of there. Now.”

“We?” I asked, grimacing. “We barely made it out of Savannah alive the first time. What makes you think going back again will be any better? Plus, that video is a few days old. She might not be there anymore.”

“I have to go back for her,” Riza said, her eyes swirling with a mixture of pearlized colors. Sparks of electricity arced from her fingertips, a more offensive ability Kitsune possessed, and I couldn’t help an instinctual flinch. No one ever wanted to be electrocuted. “Surely someone will help me. We can’t just leave her there.”

The appearance of the Kitsune’s sister was likely a trap, but the pleading in her voice tugged at my heart, but the only person who might know a safe way in and out of the SECR didn’t want to have anything to do with me or my brother. Charlie’d told us to leave. Even though the mate bond between us had started forming, we’d honored her wishes. The ball was in her court. We wouldn’t approach her again unless she asked for us. It wasn’t the Lycan way. 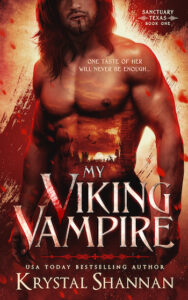 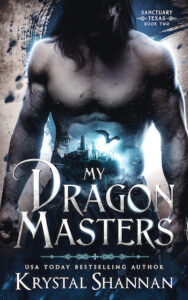 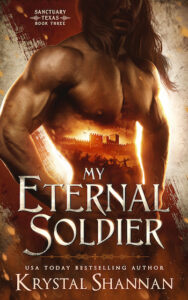 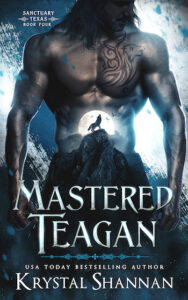 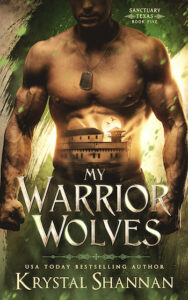 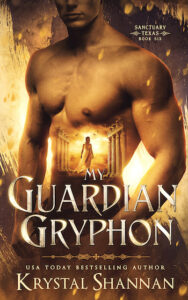 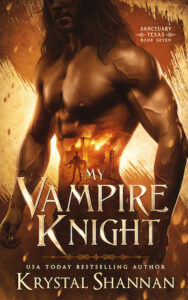 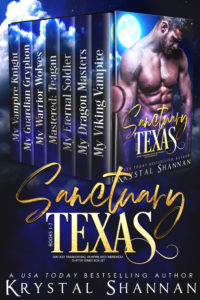