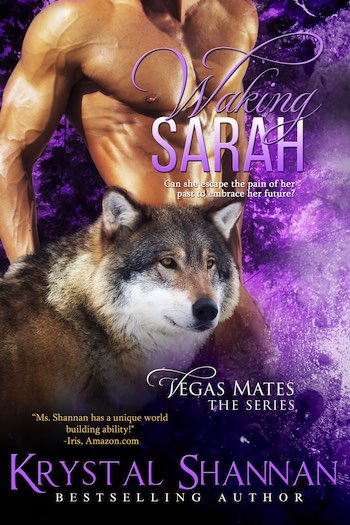 Latent werewolf trainer, Chris Michaels takes his job seriously at Woodhaven Mountain Inn, especially with threats of an attack closing in. But the new and beautiful redhead with the sad eyes and broken heart has thrown off his focus. Knowing the connection to her is strong, but not magickal, Chris refuses to listen to his inner wolf.

Torn between what she thinks and how she feels, Sarah McClain is overwhelmed by the tragedies of her past and the voices that have haunted her since childhood. Wanting to give in to the darkness that threatens her, Sarah teeters on the edge, while trying to ignore her true identity. It’s up to Chris to heal her broken heart and help her embrace what she really is. Will Sarah welcome her new world or is the pull of pain too powerful to endure?

She’d dropped out of college and come home to Vegas to find Sam already married and Margaret in a rapidly-becoming-serious relationship and now married as of today. Margaret had told her earlier that day she’d wanted to get married in May, but somehow her big bear of a fiancé convinced her September would be better.