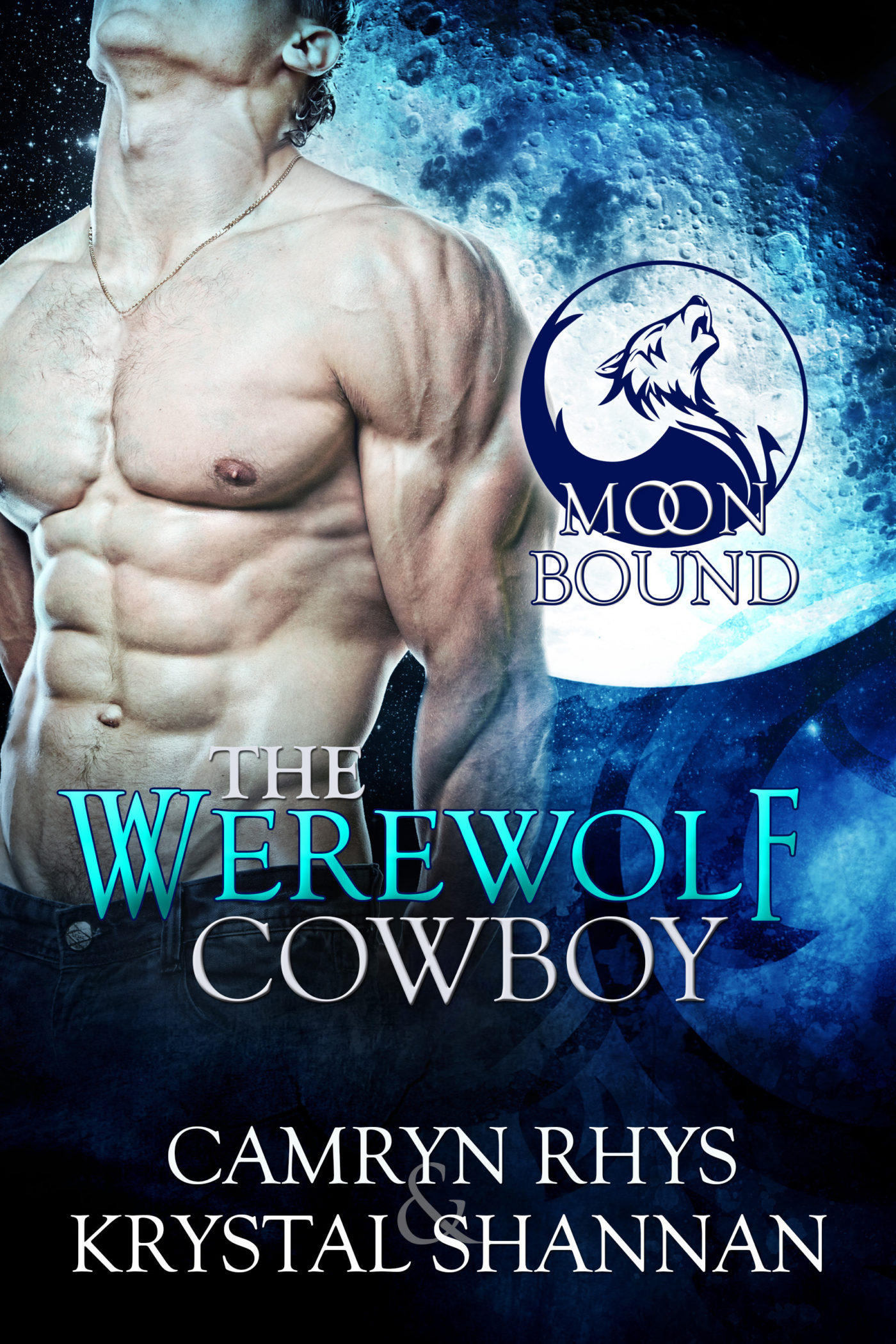 The scent of a strange wolf lingered over Everyday Joe’s bar like invisible fog. Allan VonBrandt held up one hand and halted the two deputies who’d come along as backup.

“I’ll handle this one alone, boys.” He pulled his cowboy hat down to the edge of his brow. His damn brother had promised him there wouldn’t be any trouble, but with four families of wolves in town for the weekend, he should have known.

He pushed through the narrow door. The dance floor was empty and the bar was dead, except for a few regulars and a crowd of drunk cowboys tossing punches over near the mechanical bull.

The lights had been turned down for the Thursday crowd and several glass-tube Ladies’ Night neon signs were the only significant illumination. He nodded at the staff huddled around the long wood-top bar.

“Y’all stay out of sight, now. I’ll handle this mess.” He crunched over broken glass and hooked one thumb around his belt.

Six big cowboys in flannel shirts and Wranglers traded punches under one of the flashing signs. Allan whistled, and the cowboys looked up at once, like a bunch of empty-eyed cartoons, drunk questions on their lips.

“What the damn hell is goin’ on here?” Allan asked, but punches kept landing from some other dark corner. He turned in a quick circle, looking for the source of the noise, listening to the racing heartbeats and trying to single out the wolf among them.

Suddenly, a Wranglered body flew over the mechanical bull and crashed into one of the frozen men, bowling him to the ground.

“Hey! Stop.” Allan moved around the bull, into the half-dark just as the legs of a chair whipped into the air and another Wrangler-clad ass went sailing out the other side of the mechanical bull.

Allan took a deep breath and growled, “I said stop.”

Out of the shadowed corner, the figure froze, but the chair continued to move. It sailed out of her hands, out of sight. Off to his left came the unmistakable crack of something giant and glass shattering into a thousand pieces.

The inhale of her breath broke the silence. “Shit.”

She dropped her hands and whirled around to face Allan, her delicate-featured face blinking in and out of shadow under the intermittent pink light of one of the flashing signs. The curve of one shoulder shimmered with the heat of unmistakable magick. Then the other, like an invisible force field wrapping around her.

She glanced at the cluster of cowboys and they all clamored at once. Various rounds of “I didn’t do it,” and “It was her.”

Allan interrupted the noise with a smack of his fist on a nearby table. “Everyone shut up or you’re all going to jail.”

But he couldn’t take his eyes off the wolf. His heartbeat crept up, faster and faster, and his breath came too quick. In the low lighting, he couldn’t make out much, but he could feel the waves of magick surging, trying to drag him toward her. A phrase his dad had used reverberated through his mind, unbidden…

He backed out of the circle, keeping his eye on her. She matched his slow steps, coming toward him and into the light. Long black hair swayed behind her, side to side, almost past her waist. Her white-blue frostbite eyes pinned him and her nostrils flared.

No. Not with a wolf.

The strong spice of magick snaked through the air and caught him by the throat. He swallowed against Fate’s grip, against the coursing blood and the heated breath, against the loss of control.

Here he was, in a bar fight, trying to help the humans keep their peace, getting sucker-punched by magick. Why couldn’t the wolves have stayed on the ranch?

Allan broke the stare-down and snarled at the cowboys, “Someone tell me what the hell happened here. Right now.”

Cowboy One pointed at the wolf. “She started it.”

“She broke a bottle on me.” Cowboy Two swiped at the glass Allan had walked through, then flashed a bloody gash on the side of his hand.

“All I did was ask her to dance,” said Cowboy Three, nodding at the jukebox. “Skynrd was on. It’s kinda my thing.”

On top of the jukebox, the discarded chair rested in a pile of glass shards. Something had been hanging up there, and the chair had obviously shattered it and brought it crashing down. Allan couldn’t remember what—life didn’t take him to Joe’s very often except to break up bar fights. He’d have to ask Joe what had been damaged and find some way to pay for it.

And at the center of the fray was this raven-haired beauty with the icy gaze, crossing her arms under her breasts and holding his eyes in a fearless dare.

“So it took six of you to teach her a lesson?” Allan raised an eyebrow.

“We didn’t do anything. We tried to stop him.” Cowboy Four pointed to Five and Six. “When I heard the bottle break, I stepped in and they jumped us.”

“It escalated real quick from there,” Five said.

Allan pursed his lips and glanced at the wolf. She still hadn’t spoken in her own defense, but the magick pull grew stronger by the second. From a far corner, in the booths, someone spoke up to validate Cowboy Four’s story.

Allan depressed the button on his walkie. “Backup, come on in.” Within a few short moments, his two deputies were crunching through the glass. He pointed to the first group. “You take those three, Brice. And Young, you’ve got these three.” He zeroed in on the wolf. “You. Come with me.”

“What should we do, boss?” Eli Brice’s voice caught Allan as he retreated to the stage, where the light petered out. The wolf followed, her steps slow and sultry. She was going to make this about the magick, he could tell. She was probably one of those Louisiana wolves. They ask Fate what to have for breakfast.

Not Allan VonBrandt. His mother had taught him better. Magick served one purpose—since the creation of the Moonbound race—and it wasn’t a fucking fortuneteller.

“Get their statements. Take ‘em in if you have to.” Allan turned his back on his deputies and tried to ignore the thrumming pulse of her scent, the closer she came to him. When they were a good ten feet from the humans, he rounded on her. “What in the hell are you doing out here on your own?”

She turned her tongue inside her mouth and a smile crept across her round, full lips and a Louisiana drawl rolled off her tongue. “It’s Ladies’ Night. I’m a lady.”

“Aaron promised me. He promised that no one would come into town.”

She shrugged, and her breasts bounced inside her strapless top. She wasn’t even wearing a fucking bra. These assholes had zeroed in on her because she looked like sex on a lollipop stick, ready to lick. Tight jeans accentuated the curve of her ass and the black corset-y thing appeared to be one whisper from slipping down over the rounded tops of her breasts.

No wonder they tried to pick a fight with her. They were hoping she’d flash them and were willing to take a punch for it. A hard knot formed behind his sternum at the thought of all her skin on display. Allan couldn’t beat down every jackass who wanted to see her breasts. Or her ass. Or any damn part of her body.

Holy hell. Get a grip.

He shook his head to clear his thoughts. “I should arrest you.”

She put her hands together in front of her, pushing her cleavage up over the edge of her top. “Cuff me, officer.”

“Don’t play games with me. I’m not from New Orleans. I don’t give wolves special treatment.”

Her eyes dropped to his fisted hands. “And yet, you came in here by yourself and left your deputies outside. You isolated me, near the rear exit, I might add, and I can see in your eyes that you feel the magick. You want me as much as I want you.”

Allan cleared his throat. “What I want is for you to go the hell back out to the ranch and stay there.” He turned back to his deputies, who had their notebooks out and were scribbling statements while the cowboys shot angry looks in her direction.

“You want me. You want to fuck me.” The word slipped from her like a wet strand of hair sliding off a naked shoulder…and then he could see in his mind…her naked shoulder, her dark hair, her wet skin…

Dammit. If he didn’t do something, he was going to end up with a full-on erection in front of his deputies. The thought of sex was already starting to pump his blood. Sex with her.

Nope. There will be no sex with her. None.

“Take their statements and let them go,” Allan called to his deputies.

“What about the damage to the bar?” Eli’s pen froze in midair and his open-mouthed question was echoed in the faces of all the cowboys.

“I’ll take care of it.” He grabbed her by the arm. “She’s family. I’ll see that she gets out to the ranch. You two go back to the station and file a report.”

“Are we supposed to arrest anybody?” Jeff yelled after him, but Allan had already hustled the she-wolf out the back door.

Once he had her out into the crisp November evening, he pointed to his big, white Trailblazer with Sheriff printed on the side in blocky, green letters. He still hadn’t gotten used to driving the thing—it had only been a week.

One damn week into the job he’d been wanting for ten years, and wolves had already started to encroach on his territory. He didn’t care what night it was, he was going to make sure he delivered her to Aaron with a clear warning.

No wolf shit in Somewhere. None. Too much danger of being exposed.

“Get in the car,” he said, releasing her arm so she could open her door. The less physical contact, the better, with the magick affecting him the way it did.

But instead of following his direction, she pushed on his chest, knocking him back against the brick façade of Joe’s bar. She pressed her body against his and slid her hands up his sides.

Allan dodged away from the kiss she tried to plant on him and she grabbed his shirt, wrestling him back against he building. Her smile was secret, sexy.

“All right now.” He grabbed her arms and walked her backwards toward his vehicle. “You are coming with me.”

With hooded eyes, she glanced down at the front of his pants. “You bet I am, cowboy.”