To Plan For a Mate Excerpt 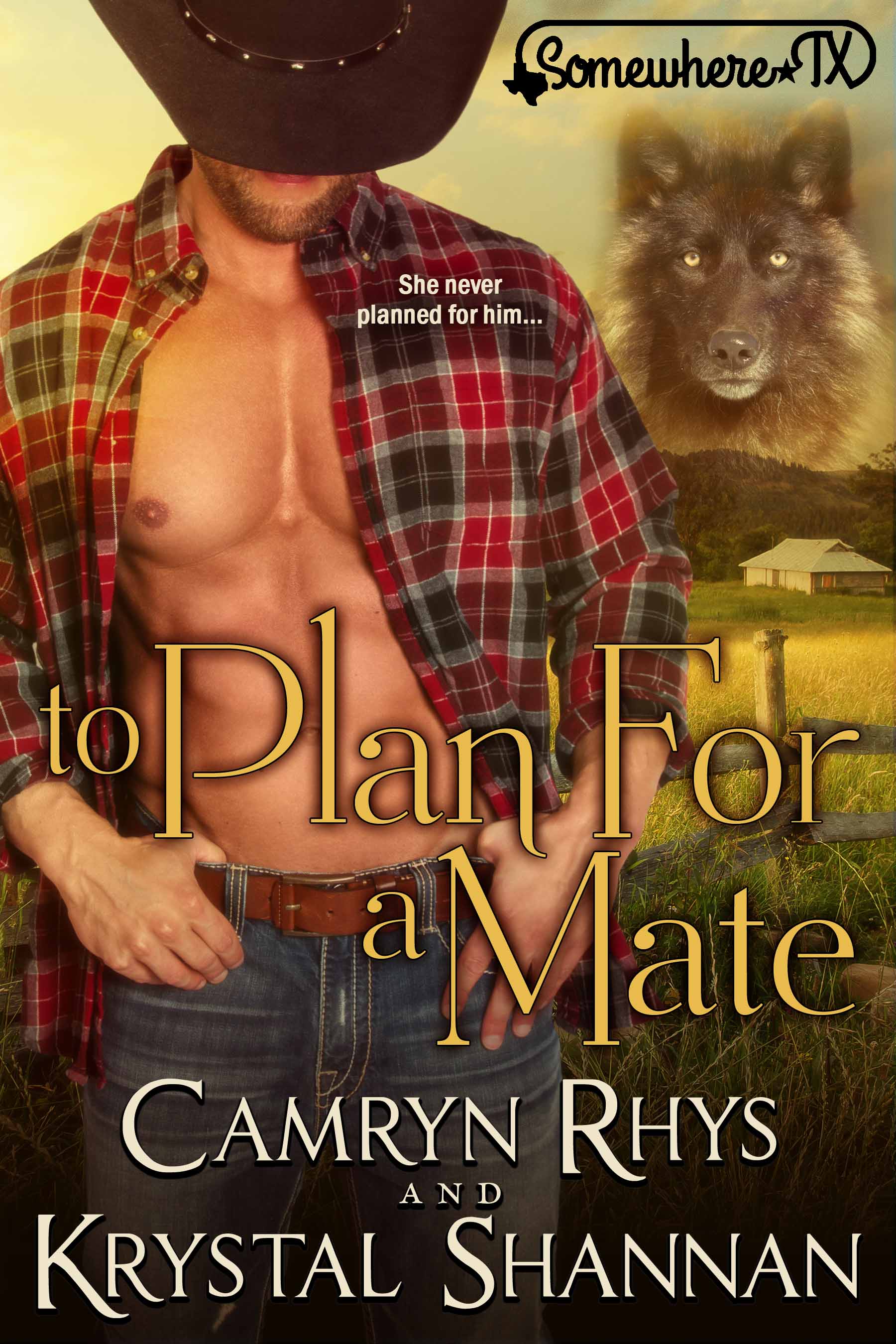 Thursday night of the Alpha Summit

The VonBrandt mansion was massive. Helena Quade swept her gaze around the two-story dark paneled foyer. Grand staircase. Hardwoods. Paintings that looked like they’d come from a museum. The VonBrandt family had been in Somewhere for over two hundred years—but that’s all she could find on Google. No one would ever know from the pictures online or articles about their energy company that the VonBrandts were one of the oldest, richest, and most powerful werewolf families in America. And she was standing in their house.

Helena dropped her messenger bag by one of the big leather chairs along the wall by the wide staircase. She just wanted to stare. It was so breathtaking. But in the car, she’d been about to finish an invoice when Gretchen announced they’d arrived and dragged her out into the Piney Woods.

Gretchen, like many of the other Quade pack females who’d come for the moon, was mainly interested in pairing off, and had made a beeline for their cousin Kate, who was talking to a bunch of hotties. But Helena had work to do.

She finished the invoice for the late shipment of feed that someone had failed to put on her desk until that morning. Someone named Daniel Quade. Her cousin and her job-share at the ranch. She sorted the invoice, waiting for him to appear.

Several of her cousins filed in, and finally, she saw Daniel. She whistled for him and he made a beeline. “Sign this,” she said, handing the invoice over.

“You should put this away.” He took a quick look around the foyer. Helena knew who he was looking for. Grandfather.

“He was another five minutes behind me, at least, in Jessa’s car,” she said. “It’ll just be quick. There are only a couple of them.” She took one signed invoice and moved another forward.

“You know why Grandfather brought you girls along this weekend, don’t you?” he asked, keeping his voice low as he took a seat beside her.

“I don’t even know why you’re here.” She moved the invoice and pulled out the checkbook, making out the check.

“I guess.” She ripped the check out and passed it to him for a signature.

“There’s some unbonded wolf Aaron found. He called us all together to talk to the regional packs about it, I think. Not sure why.”

Helena let out a long sigh, taking the check back and pinning it to the invoice with a gold and teal paper clip, because teal was the color of to-be-mailed. She’d have to get the stamps out of her travel bag, which was still in Gretchen’s car.

He nodded and leaned back in the seat. She wasn’t sure if it was relaxation, or if he was trying to seem nonchalant. Daniel was still un-mated, like her, and apparently, it was all the rage to look for a mate with all the other packs around.

“How does that even happen?” she asked, tucking the invoices back into her planner pages. “How did it survive?”

“Exactly. They don’t know.” He inclined his head at the door to the hallway, where their cousins had disappeared. “That’s why they’re all meeting.”

“Without us, though? Without the girls.”

“Hey.” He threw up his hands in mock surrender, like he’d heard the accusation in her voice. “You know me and the guys appreciate everything you do. You and Kate keep everything running on the ranch so we can focus on winning rodeo events, which is all Grandfather really cares about.”

“You may appreciate me, but I deserve to have the actual title of ranch manager. Instead, I scurry around men all day and do everything you don’t want to do or are too busy to care about. I love the ranch. It’s my life.”

Daniel shook his head. “He’d never let you have the job. Not even if we all ganged up on him and asked for you.”

She knew that, but it didn’t stop her from dreaming that one day everything she did would make a difference. That one day her grandfather would see how valuable she really was to the pack. She wasn’t just some worthless half-breed wolf.

“You know nothing would get done if it weren’t for me.”

“I know that. But it doesn’t matter, Helena.”

The phone in her pocket buzzed. “Hold that thought,” she said, giving Daniel a glare. She pulled out the phone. Her dad’s name flashed on the screen. She tapped the green button on the face and held the device to her ear. “What’s wrong, Dad?”

“How do you know something’s wrong?”

“Because you don’t call me unless there is.”

“Geordie got a big slice down his flank. He needs a vet, but Dr. Wade isn’t picking up.”

Helena took a deep breath. Don’t yell. Be calm. Even her own father was useless when it came to running the business. “Dad, there’s a pink book in my middle desk drawer.”

“Yeah,” he said. She could hear papers crinkling and pens being knocked around. Something crashed to the floor and spilled. Plastic or metal? She couldn’t tell. Helena cringed, thinking of the mess she would discover when she got back home. No doubt all her perfectly organized office supplies would be all over the floor, the desk, and probably covered with coffee stains too. “Okay, pink book. Got it.”

“Turn to the section labeled M. Look for Doctor Miller. Call him, he’s our back up vet.”

Daniel started to say something next to her, but a gruff voice shushed him. Her heart fell to her stomach and she slowly lifted her face, praying he wasn’t standing there. Her body already knew. If she’d been paying attention, she would’ve felt the bond between them. The alpha bond that connected her to her grandfather. The fury seeping through that bond now, was nearly enough to bring tears to her eyes.

“I gotta go, Dad,” she whispered and hung up on her father.

“What the hell is he calling you for? Why do you have a book in your lap with invoice numbers and our ranch supplier’s name highlighted in green? You don’t deal with the ranch suppliers.” He reached down and snatched the book from her lap. Instinct warred with self-preservation. She couldn’t grab it back. She couldn’t argue. Not with her alpha.

He tore the page out of the middle of the planner and shoved it into Daniel’s face. “This is your job, is it not?” His voice bellowed and echoed through the foyer. Helena wished she had more than the ability to shift into a wolf, right now she wished she could shrink down into something so small she wouldn’t be visible to the naked eye.

“No more. Do you hear me, Helena? Do not help Daniel, your father, none of them. You are here to find a man who doesn’t care that you’re not a pure wolf.”

Daniel knew. That’s what he’d meant by ‘why I was here’.

“That’s the only reason I allowed you and your cousin to come along to this summit. Find a wolf and bond to him and have him ready to come back to El Paso with you by the end of the weekend.” He ripped the planner apart from the binding and then tore the pages in half to further make his point.

Her breath stoppered hard in her throat and her eyes stung with emotion. The pages fluttered to the hardwoods at his feet and Daniel held her arm, holding her back from diving to the floor to gather them up.

“Do you understand me, Helena?” asked her alpha, standing over her.

She nodded quickly, keeping her lips pressed tight and holding the other planners tight to her chest. If she spoke she wouldn’t be able to stop the tears threatening to spill down her cheeks.

“Don’t disappoint me, Helena. You won’t like the consequences.” He turned his focus back to her cousin. “Get up off your lazy ass and come with me.” Daniel gave her a sympathetic look before following behind Phillip Quade like a whipped puppy dog.

She gathered up the ripped planner and turned away from the foyer to face the hallway where all the wolves waited. But there were pitying faces in every direction. It suddenly registered that her cousin wasn’t the only one who’d witnessed their ugly scene. There were so many more people milling around the hall now, just past the foyer. They’d overheard too.  They didn’t seem to side with her grandfather though. They were shooting her sympathetic looks, and a few of the men were scowling like they’d be perfectly happy to rip off a head or two in her honor.

But she didn’t need any heads separated from bodies. What Helena really wanted was to forget. And drinking was the best way to forget and to avoid feeling. At least temporarily.

She passed the big double doors to the formal dining room where she could hear a man’s voice ringing out. Must be the alpha summit—where she clearly wasn’t welcome. She continued down the hall until an open door beckoned her. It was some sort of blissfully empty sitting room, and inside sat a crystal decanter of amber liquid. She swiped both the decanter and a tumbler, settling them precariously on top of her stack of planners, and moved on, looking for a more remote dark corner to seethe and nurse her bruised ego in private.

A smaller, darker sitting room offered itself up after another minute or two of wandering through the enormous VonBrandt mansion. A few minutes after settling into her hiding place, Helena Quade downed her third over-poured finger of bourbon and set the crystal highball glass on the coffee table in front of her.

She stared at the stack of notes and planners she’d set on the big mahogany coffee table next to the half-empty decanter of bourbon. Nothing on her grandfather’s ranch would ever get done without those planners. Between her Erin Condren—which Grandfather had just destroyed—her Happy Planner, and several list-heavy travelers’ notebooks, plus her online calendar, the ranch ran as smooth as honey on a hot summer day.

Well, her grandfather and her cousins were quickly going to find out what happened when you tried to run a business without a competent manager…because, according to her grandfather, she wasn’t ever lifting a finger for any of them again.