What’s love Got to Do With It Excerpt 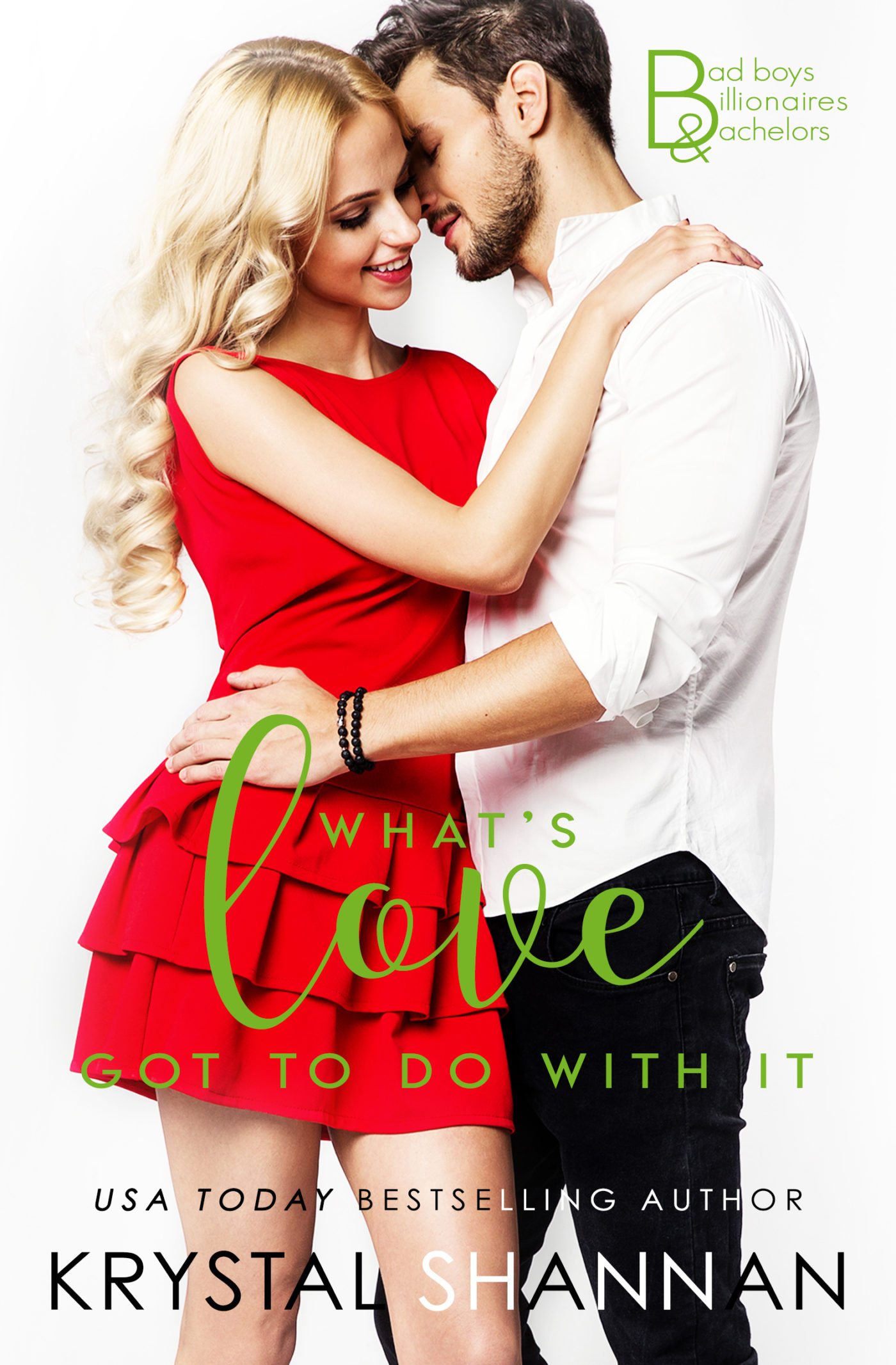 TJ Stinson smiled up at the waitress filling his coffee cup. She was cute, blonde, and had a great rack; exactly what he liked. The name-tag above her left breast read Tiffany. Even her name sounded like fun.

“No problem,” she said, flashing him a wide smile.

He almost opened his mouth to ask for her number when her gaze drifted to the stack of papers in front of him on the table. Her eyebrows furrowed, and she frowned, sending his excitement down with it.

“I know some of those girls. What are you doing? You’re not… like… online dating, are you? I can’t imagine a guy like you needing to do that.”

He closed the file folder, hiding the papers and pictures of the applicants he had so far.

“It’s a little more complicated than that. Here’s a twenty,” he said, handing her a bill. “I’ll be holding your booth for a while.”

Her smile returned, and she nodded. “Thanks. No problem. I’ll be sure to keep your coffee filled.”

A tall, leggy blonde who matched the picture on the top of his stack of files walked into the cafe. Long, metallic drop earrings brushed the tops of her shoulders, and her heels were high enough to make even him wonder how she remained upright without aid. Her makeup was perfect and her hair long and silky. He could tell it was extensions without touching it. No girl had hair that perfect in his experience, especially not during July in Texas. He’d heard enough female complaints about humidity and heat over the last couple of weeks from Pamela and Zoe that he knew exactly how it affected them.

Flashing the approaching interviewee a wide smile, he noted how much crap a chick would put on to make herself resemble the airbrushed canvases in magazines.

“Holly Porter?” he asked, sliding out of his seat and standing as she paused beside his booth.

“Yes, that’s me. I’m here about the ad you placed in the Gazette. I hope you haven’t chosen anyone yet, because I know you won’t find a better option than me.” Her voice grated on his nerves, but he gestured to the booth and sat after she did. Her tone was somewhere between a nasally cat and a lost cause. After ten minutes of asking her questions, TJ was grateful for the twenty-minute time slot he’d set for interviews.

“Thank you so much for coming by. I do have several other interviews to do, so I will get back with you later this week if you make it to the next round.”

“Oh, is it like that Bachelor show? I’ve always wanted to be on something like that!” Holly squealed. “I can’t wait to hear from you.” She popped up from the booth and excused herself.

A long sigh slipped from his chest, and he leaned his head into his hands. This was going to be a little harder than he’d first envisioned.

Over the next two hours, six more women—all leggy and blonde and exactly what he would’ve chosen as a date only six months ago—each sat for an interview. And each one he dismissed with the same line he’d fed Holly.

The next round. Shit.These shouldn’t have even been in this round.

At this rate, he could just kiss his inheritance goodbye. It wasn’t worth marrying a bimbo or a high-maintenance bitch to keep hold of his share of Stinson Railways. Roark and Nic would make sure he always had money. It wasn’t like he enjoyed working there anyway.

Grandfather’s will’s provision could shove it where the sun didn’t shine.

Tiffany returned to the table with a fresh pot of coffee and refilled his mug, a smile tugging at her pouty lips.

“Not really. I hope none of them were friends of yours.”

She chuckled and shook her head. “Nope. Although I did graduate high school with two of them.”

“I’ve got five more tomorrow morning. Can you save this booth for me? I’ll be in around nine AM.”

“I’ll need it if tomorrow’s lot is anything like today’s.” TJ handed Tiffany another twenty, and she flashed him a grateful smile. “I don’t suppose you would be interested in a date later tonight when you get off?”

She shook her head slowly. “I’m flattered, but already attached and hopelessly in love with my boyfriend.”

“Good for you. I’ll be playing my own version of The Bachelor again tomorrow then since you won’t save me from these interviews.”

Tiffany smiled again. “I’m sure you will find the right girl. Just be patient.”

“Patient isn’t in my vocabulary.”

Anna Granger scurried out of the All-Nighter Cafe with her to-go coffee and contemplated the conversation she’d overheard between TJ Stinson and his waitress. The billion-dollar playboy bachelor was searching for a girlfriend… a wife? Via interview?

She’d tried to approach Stinson Railways about funding Saddles For Hope Ranch, but their office manager told her the company wasn’t looking to take on any further charities at this time and to take a hike. Ideas of trying to get to Roark personally, or his wife, or even the younger brothers had flitted through her mind on more than one occasion. Zoe, Roark’s wife, had worked for Anna for several years now and they were friends. But he and Zoe were already expecting a baby, and she just couldn’t bring herself to barge into that special time. The other two men were in and out of town so often it was nearly impossible to track them down.

The fact that SFH had lost its biggest private investor four months ago had put Anna’s life’s work into a tailspin. But there hadn’t been a challenge in her life yet that she hadn’t surmounted. This one would be no different.

A wonderfully generous woman earlier in February, Shawn Collins had donated to the ranch. That money had kept SFH going through to the summer, and the Kane wedding had helped last month. They’d paid a pretty penny to rent out the ranch, and they’d donated all the hay from their decorative hay wall as well, allowing her to skip an order for the horses this month and probably next month, too. But if she didn’t get another investor ASAP, the ranch would close by the end of the year. She needed a million to keep the programs running and pay all the staff.

She refused to let the ranch go under.

A lot of money floated around in this little town, but the people who had it were really good at hanging on to it. The VonBrandts had actually donated some, but it wouldn’t keep her in the black past Christmas. She needed big money—like Stinson Railway big. But with the gatekeeper blocking her, she needed another in, and TJ might be her golden goose.

She could play girlfriend for as long as he needed, even a wife… maybe.

The first issue was that she didn’t look anything like the women he was interviewing for the position. And the only girl she knew who dressed like the woman who’d walked in for the first interview was her friend Terry Lao from the book club she’d joined when she first moved to Somewhere.

Pulling out her smartphone, Anna dialed and waited as the phone rang three times and went to voicemail.

“Terry, I need your help. There’s a guy and I have to dress… well… more like you.”

She hung up and sighed. At least she had the blonde thing going for her, but if Terry put her in high heels, she would probably find herself staring up at TJ from the patterned tile floor of the All-Nighter Cafe. To have a chance at pulling this off, she’d have to dig deep for her inner bimbo.

As she climbed into her pickup, her phone buzzed, and Terry’s voice squealed out into the cab through the wireless feed. “Anna! Does this mean I get to make you over?”

“I’m home right now, and the baby is sleeping. Get your butt over to my house. When do you see him?” The excitement in her friend’s voice was a little overwhelming.

“Oh my God! I can’t believe Anna Granger has a date. This is epic. I’ve been trying to get you to go out since you moved here two years ago. Who’s the lucky guy? Do I know him?”

“I don’t think you’ve met him personally. I’d kinda like to keep it to myself for a little while. Just to see how it goes, you know?” Anna said, hoping Terry wouldn’t push. “I’m on my way to your house.” She pulled out of the parking lot and headed west. Terry lived with her husband in a cute historic home right in the middle of Somewhere’s Old Town residential area. “I’ll be there in about five. I was just down at the All-Nighter getting coffee.”

She pulled to a stop in front of a whitewashed pier and beam home surrounded by a snazzy white picket fence. The gardens were perfectly manicured, and the lawn was green enough to have been blessed by the Irish.

Terry’s front door burst open as she climbed the steps of the porch. Ushered through the front of the house, Anna sucked in a gasp of air when she saw her friend’s clothes lying all over the king-sized bed.

“I just need one outfit, Terry.”

A determined head shake was followed by denial. “You always need more than one. Have I taught you nothing?”

Anna picked up a red mini skirt that would barely cover her ass and frowned. “Maybe this was a bad idea.”

Terry closed the bedroom door and snicked the lock. “A makeover is never a mistake. Look, that skirt is short. So what? If you are trying to appeal to a certain type of man, you have to be okay with letting a little more than your shoulders show in public.”

“Yeah, tank tops with wide shoulders and scooped necklines that don’t show anything. What you need is a cute cami to really show off the girls.” Terry winked and grabbed a bright aqua blue strappy camisole that made Anna’s stomach churn. She’d never even had a guy touch her boobs. How the hell was she going to be okay with showing major cleavage—which is what would happen if she wore that shirt.

It’s for the kids and veterans. She just needed to keep repeating that. She could get over having a few men stare at her chest if it meant she had any shot in hell of capturing TJ Stinson’s attention. Keeping the ranch going was the goal—no matter what.